the journal of creative geography

The Machine in the Garden: Framing the Agricultural Landscape

Triptych: A picture or carvings in three compartments side by side, especially for an altar.

Multiple-panel artworks are the predecessors to cinematic montage.  Before the advent of cinema, artworks comprised of multiple images attempted to cross time, space, and movement to manipulate meaning and engage the viewer in narrative.  Prior to the invention of the camera, drawing captured an image.  Triptychs and predellas (small-scale narrative paintings along the bottom of the altarpiece) often depicted religious narratives through a succession of images.

I began a graphic interpretation of the agricultural landscape after re-reading Leo Marx’s The Machine in the Garden.  Marx posited in 1963 that the machine has been used to alter the American landscape, even referring to America as “the world’s most productive machine”–suggested by “the recurrent image of the machine’s sudden entrance into the landscape.” (343)

In The Machine in the Garden, Marx probes America’s relationship to nature in literature from Shakespeare’s “The Tempest” through Hawthorn, Emerson, Thoreau, and Fitzgerald, stopping short of World War II.  He juxtaposes the pastoral against the wild.

Marx’s American pastoral history stops just short of the transfiguring moment: The American agricultural landscape was powerfully transformed as a result of technological advancements related to the World Wars, from the Haber-Bosch process (and its relationship to man-made fertilizers, mustard gas, and the gas chambers of Auschwitz) to armored cars.  As war technology was adapted to a peacetime economy, the machine entered the farm with a vengeance, but society was largely inattentive.

My graphic exploration of the agricultural landscape began at the college farm at Rutgers, a land grant college devoted to “the teaching of practical agriculture, science, military science and engineering” under The Morrill Act of 1862.  This farm is located on-campus adjacent to student dorms.  It is a main entry onto campus.  Yet few students are cognizant of the farm–maybe because it is a place of work.

The act of making several drawings at the farm enabled me to “see” the farm and its interstitial spaces.  Did my pastoral inclinations blind me to what was before my eyes?

I began by drawing tractors—the quintessential machine in the garden, but I wanted to also include the pastoral—the animals and fields.  Pulling off the entrance drive, I sat in a folding chair and drew what was in front of me –the feeding apparatus for pigs and for cattle. 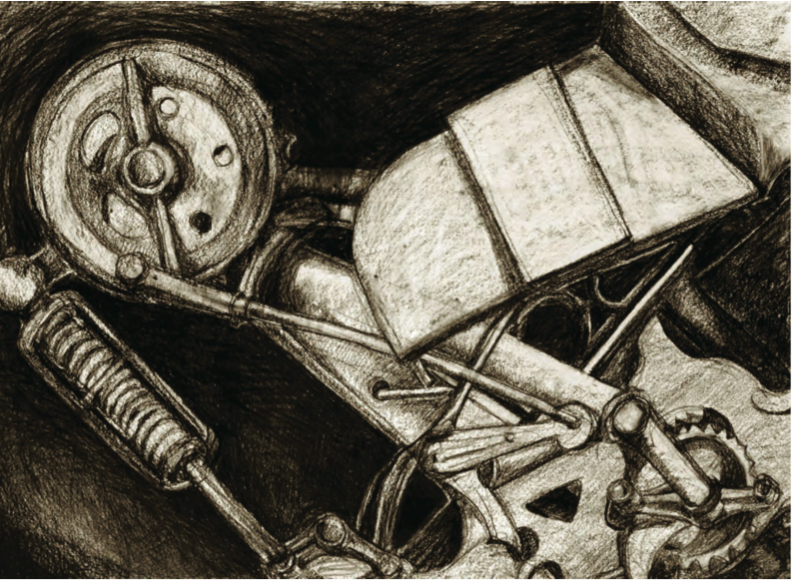